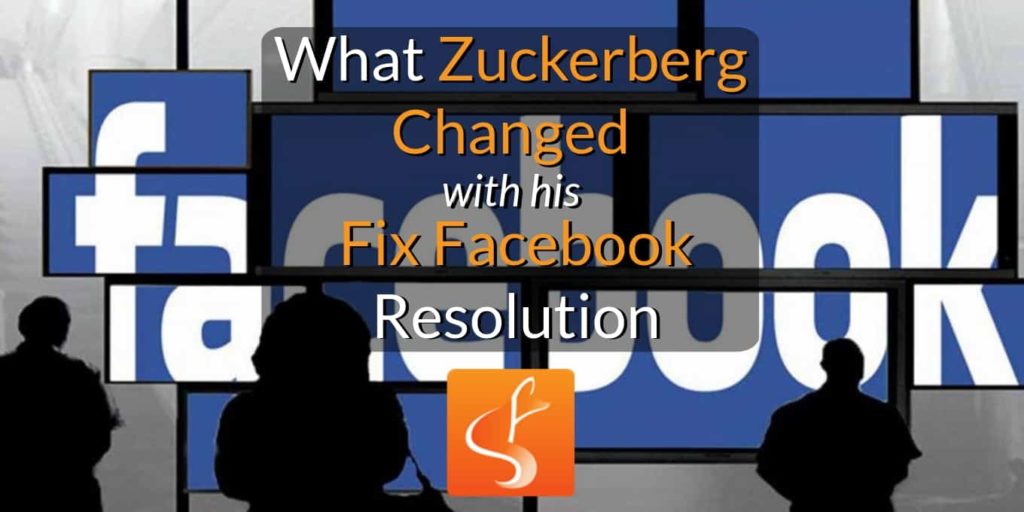 Not long ago, the first day of spring was finally announced and the never-ending winter of 2018 came to an end. As the weather continues to change and we all begin to feel more relaxed most of the remaining New Year’s resolutions could melt away as well.

Now you can add Facebook’s resolutions to that list. But we can all agree, their commitments to change the news feed and content system were ambitious and controversial. And their problems still aren’t solved. Social media never sleeps and there’s always controversy on the horizon.

Mark Zuckerberg is famous for his yearly resolutions which have been ongoing since 2009 and included: wearing a tie every day, learning Mandarin, only consuming self-harvested food products and visiting every major city in the U.S.

Although there’s been plenty of criticism regarding Facebook’s terms of service and technical policies, the last two years have seen their company splashed over front page news.

From the allegations that elements of the Russian government were manipulating Facebook to influence the 2016 US election, to its failure to censor hate speech, graphic violence and live criminal activity they’ve been in lots of hot water. They’ve even been under fire for helping organize and empower violent protests and as recently as this week there have been explosive allegations about the negligent handling of user data.

So it wasn’t very surprising to most when he announced that this year would be spent looking inwards at Facebook in hopes of solving these growing and very public issues. After a few weeks of company introspection, it was revealed the two new year policies would involve prioritizing content from friends and family over businesses and experiments with a dual news feed.

So what came out of these new year policies? And why have these changes failed to alter Facebook’s negative press?

A Friends and Family Update and The Dual News Feed

The most widely known and discussed change involved the algorithm shifts to prioritizing families and friends over brands and publishers. Announced in a blog post mid-January they described the changes as reflecting feedback from the community that generally insisted on “seeing more inspiring and relatable posts that promote sharing organic reactions.”

Although people reacted fairly well to this change which is still ongoing and experimental there are some reported cases where ads are still saturating news feeds. The dual news feed experiment was not so well received.

Originally isolated to six countries (Sri Lanka, Slovakia, Bolivia, Serbia, Cambodia and Guatemala) the idea was to segregate organic user posts in the main feed and offer an “explore feed” for promotional posts and corporate advertisements. However, companies could pay an extra fee to have certain types of posts boosted back onto the main feed.

As of last week, this experiment officially ended and the Dual News Feed will be relegated to a place in social media history. Ultimately, almost every survey collected by Facebook showed that the will of advertisers was too strong and people eventually couldn’t see organic posts of friends and family even with a separate feed.

But this isn’t quite the end of the experiments as they’ve expressed interest in exploring ways to guarantee “meaningful social interactions”. And in a way, the experiments should be ongoing and democratic to avoid any worse backlash than they’ve already experienced. After all, they need to avoid losing the support of their community or a billion dollars like Snapchat did recently because of insensitive advertising.

So what do you think? Let us know what changes you supported, hated or if you noticed any changes at all! Ultimately, everyone from regular users and corporate advertisers playing by the rules shouldn’t lose sleep about these changes as we said in other posts.

The best social media content comes from an honest place and your loyal fans and customers react to that. Keep doing you and posting things that are naturally related to your brand, your business and your community! And contact us if you need some help showing off the best parts of your business on social media.