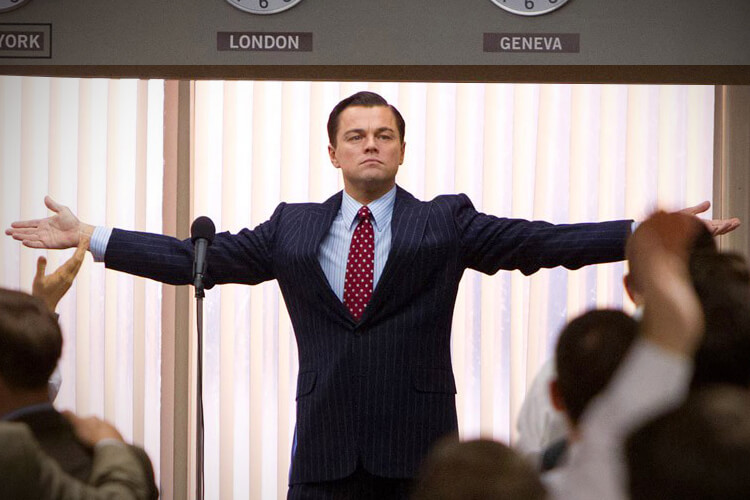 The Wolf of Wall Street, the 2013 movie starring Leonardo DiCaprio that charts the rise and fall of Jordan Belfort and his brokerage firm Stratton Oakmont, is a devilishly entertaining film. It’s so entertaining that it might cover the fact that most of the lessons in the movie are all about what not to do in business and marketing.

But stories of success often offer learning opportunities! In the nearly 3 hour running time, the movie gives a number of important lessons to think about when putting together a marketing plan. None of the five lessons below involve wild parties, but if you can’t resist, we suggest keeping them off company property.

Jordan Belfort’s idea was simple, and one that had been around for a long time: pushing penny stocks, the kinds of stocks often only offered to people who wanted to feel the rush of potentially fast cash but didn’t have the money. He took the stocks of these small businesses, often worthless, and figured out that the best way to push them was to target those with a lot of money.

Belfort revolutionized (and ultimately destroyed) this part of the business by changing lanes. The most successful way to grow was to look at the data, what made certain people tick, and follow a new path. Knowing the perfect customer is ideal, and can change how you structure your marketing plan. It also means no more wasted time targeting the wrong people!

2. The Art of Persuasive Marketing

What made The Wolf of Wall Street

such an intriguing movie is that it’s all about persuasion. What catapulted Stratton Oakmont to the top was Belfort and company convincing others of its value, not simply stating it wanted a lot of business.

Of course, Leonardo DiCaprio’s charisma is part of what makes the movie so persuasive, and we can’t all be born with his looks and personality! But a marketing campaign shouldn’t bully or simply state the reasons why the product or service is good – it should persuade. Convince your audience why they’ll be better off going with you, don’t simply tell them that they should.

To sell his wares, Jordan Belfort ultimately would end up asking potential customers a simple question: “What is your biggest headache right now?” Headaches these days usually begin with money or a lack thereof, and from Stratton Oakmont’s point of view, the remedy of choice was penny stocks – low investment, high potential for return.

Of course, this took Belfort into pretty unseemly territory, but it’s a good question to answer, even if your audience doesn’t know you’ve asked it of them. Understand the common problems they’ll encounter, the “headaches” they’re feeling or will feel, and persuade them that your company offers the solution.

There’s a running line in the movie: “sell me this pen.” Belfort uses it as a test, gauging the responses of those he asks, though the “correct,” satisfactory response is never really given in the movie. The pen is just a stand in, and how one responds to it shows what kind of salesperson they are.

The only real “solution” in the movie is offered when one person takes the pen, then asks Belfort if he could get his information. Belfort, naturally, doesn’t have a pen anymore and can’t write down his contact info. “Supply and demand,” he says.

Your marketing should solve a problem for your audience. Your plan should identify what they’ll need, when they’ll need it, so they know who to come to instinctively when they encounter the problem. Marketing has the added bonus of research and planning behind it; you won’t have to sell your audience a pen on your feet.

The Wolf of Wall Street is a super entertaining story that might make breaking the rules seem enticing, but it’s still, at heart, a cautionary tale. What started out as “run a successful business” quickly turns into “commit fraud by artificially inflating stock prices,” “rip off as many people as possible”, and “do drugs in the office.” The important lesson of the movie is don’t lose sight of your goals, because in doing so, everything can quickly spiral out of control.

Posted in Blog, SlyFox Says... and tagged Advertising, Business, London, marketing, Ontario, persuasive marketing, The Wolf of Wall Street
← Your Pool or Mine? #smallbusinessthatrocksOh Baby, We Love This #SmallBusinessThatRocks →