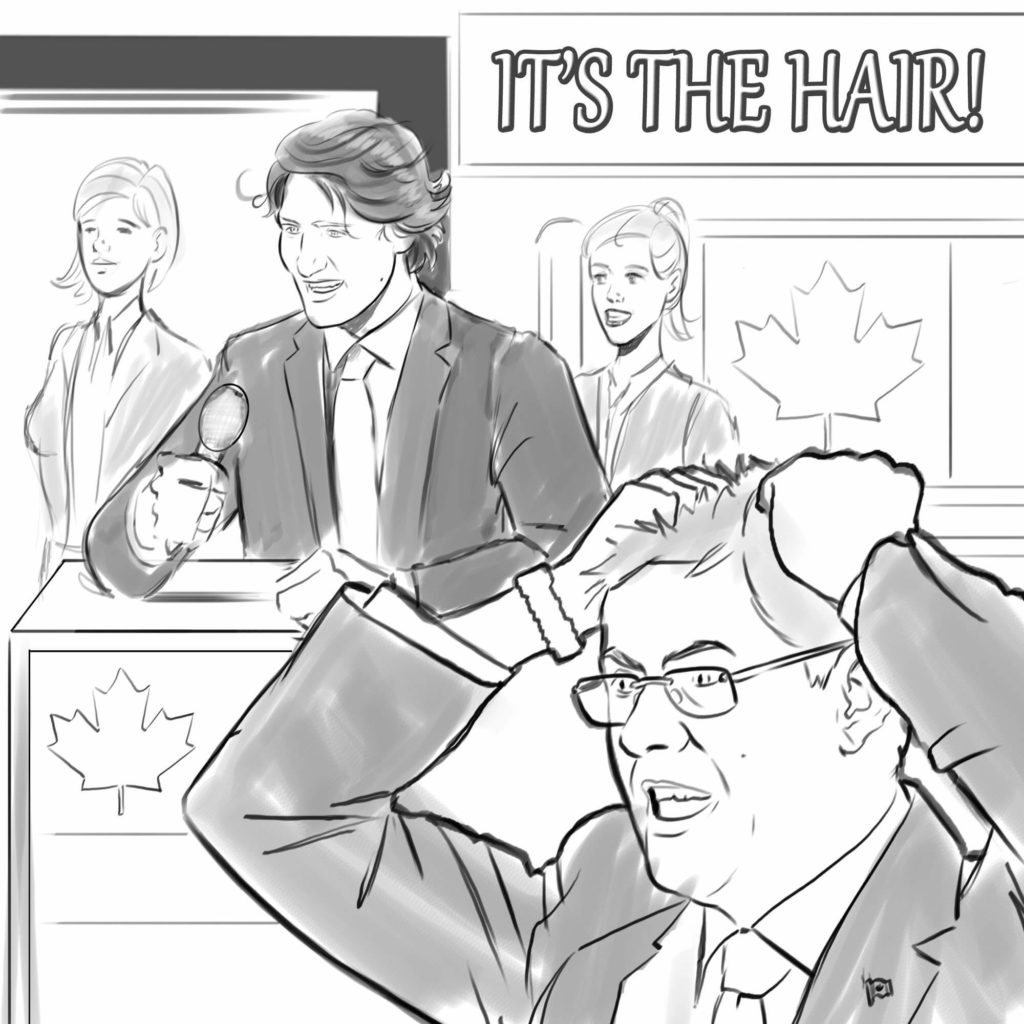 If the Conservative Party of Canada had taken every penny they spent on attacking Justin Trudeau and had instead handed it over to the NDP to use for their campaign, the result would have been more favorable for the Conservative cause. Here’s why:

With a little help from the Tories’ string of ads earlier this year, Justin Trudeau—now designated to be the next Prime Minister of Canada—has entered the world of iconic hair. The CRTC ensures every political party has the opportunity to purchase up to six-and-a-half hour of prime-time adspace, but how have these ads changed over time? Does the political climate of 2015 have the same tolerance for slander campaigns that it did, say, twenty years ago? And what does it mean when the one positive comment made in these ads—“Nice hair though”—is the one line to catch the public’s attention?

By the election in 2011 a large group of voters, who would not usually take interest in politics and carried no allegiance to any particular party, began to mobilize organized voting strategies with the singular goal of ousting Harper.  For the 2015 election the media put a name to it—the “progressive vote”.  It was critical for the Conservatives to split these progressive votes as evenly as possible between the other parties. The strategy worked for them in 2011, where “progressive” supporters failed to channel their full, united support into a single candidate.  A late push from the NDP led the Conservatives to capture a majority Government with only 39.6% support while the NDP party ranked second in popularity.

Stephen Harper’s famous “interview” ads had a clear agenda: to present Justin Trudeau as inexperienced. Lines like, “I’m not saying no forever, but not now,” were an interesting tack for the ads to take. Instead of painting Trudeau as a villain or a fat cat—probably the two most ubiquitous strategies for ads in this vein throughout the years—the interviewers expressed their doubts in Trudeau’s experience. The line “Prime Minister is not an entry-level job” is another key example.

Certainly, this registers on the benign end of the slander scale, probably a smart move in a media climate more sensitive to name-calling and defamation than would be tolerated in the past. So, why did this campaign backfire so badly? Some free publicity found in the light-hearted jab at the end of the commercial may have helped Trudeau stand out from his fellow candidates—a major misstep for the Conservatives.

The problem with this ad might lie in the difference in attention spans between today’s public and the public of the past. Today, we are used to grabbing hold of more concentrated tidbits. Nothing in the ad was as concentrated as the flippant line offered in its last seconds: “Nice hair though.” A bit of harmless humor? Maybe even a compliment made in the attempt to further soften the sting of the script’s words? In actuality, this sentence proved to be the one with truly viral substance.

The ad, which was intended to push voters away from Trudeau, had the exact opposite effect. I mean, let’s just face it: Trudeau is a young, good-looking guy with a great haircut and, at the time, a chance at the country’s top job. Putting 10 million dollars in advertising which ends in a great one-liner calling attention to that hairdo immediately elevated Trudeau’s celebrity status to that of a young superstar aiming to succeed the current leadership.

Splitting the vote between “progressive” candidates would have been the key to another conservative victory. The last two Conservative victories had a lot of help retrospectively from an NDP push in 2011 and a push from the Bloc Quebecois in 2008.

By selecting Trudeau as the target for attack-ads quite early in the election, Conservatives unwittingly marked Trudeau as the man to beat Harper…and guess who was waiting? The “anyone but Harper” camp. The message identifying Harper’s nemesis was out and clear as day, with a reach of the entire Canadian population and a frequency of 4 times daily: Justin Trudeau, the guy with the great haircut and relation to legendary Pierre Trudeau who served several terms as our Prime Minister staggered throughout the years 1968 – 1984, was the man to beat Harper in 2015.

NDP candidate Thomas Mulcair, unfortunately for him, could not capture the same recognition awarded to Trudeau. Nearly all of the seats that his party had built in 2011 under the leadership of Jack Layton, have now migrated to Liberal support, rallying behind Justin Trudeau in a huge push to oust the Conservative Party.

There’s a lesson to be learned here for all of us considering advertising solutions: Throwing money towards a purpose does not necessarily carry the desired result.  The accompanying strategy is of equal or greater importance.

Comparative advertising when done correctly, is executed by the industry’s “runner up” brand. The Pepsi challenge for example, had no problem with calling out Coca-Cola because they know that the brand already has achieved maximum product awareness. By comparing themselves to Coke they deliver the message that their similar beverage, is as good or better. Equally sharing the market, for Pepsi, would be a desirable thing.

Trudeau’s name ringing out in all of those commercials funded by the Conservative Party when heard by anyone with even entry-level knowledge for marketing, immediately portrays Harper as the underdog. Furthermore, investing at any level on an “attack” ad with absolutely no teeth aside from “he’s young and good-looking” is a blunder that leaves us speechless. Even Pepsi wouldn’t brave the advertising message: “Coke tastes great!”